Takii Europe has recently added Africa and the Middle East to its sales territory. Takii & Company, Ltd. in Japan has transferred these two regions to its European subsidiary. The expansion was officially marked by the opening of a new packaging line.

Takii & Company has operated in Africa and the Middle East for some time. Although the efforts of the Japanese parent company have been very successful in both regions, the focus on these two growth markets will be intensified through the involvement of the European subsidiary. The central location of Takii Europe will allow the breeding company to deal more efficiently with partners in Africa and the Middle East in the area of distribution and sales.

“This market expansion is a milestone in our growth strategy,” says Ton Kuipers, Managing Director of Takii Europe.

“Our objective now is to strengthen Takii’s position in the Middle East and Africa, in both the flower and vegetable sectors.”

Erik Vesseur, Sales Manager Vegetables, adds: “In these regions, too, we will focus on growth in sales of our top crops: onions, water melons, brassicas, tomatoes and cucumbers.”

The addition of two new markets means a significant expansion in capacities within the European organisation, not only in terms of strengthening the team, but also with regard to processes and space.

In order to respond to the specific wishes of customers in Africa and the Middle East, the company has invested in a specially developed packaging line for canning seeds. The addition of this state-of-the-art packaging line to the existing machine stock was the reason why the entire packaging department has moved to a newly equipped unit at the Takii Europe site in De Kwakel.

At the official and festive opening last Saturday, mayor Dagmar Oudshoorn-Tinga was given the first can off the line by a very proud Ton Kuipers. With all the Takii staff, they raised a glass to toast the successful launch of a new chapter for Takii Europe.

» Watch the video of the opening 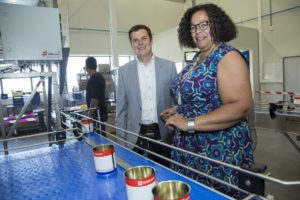